Ahh, spring time in the city! Is there ever a better time of year?

The magic of living in the Northeast –Boston in particular- is the true beauty of the seasons. If you ask four different Bostonians what their favorite season is, you’ll receive –well- three different answers. Let’s face it, nobody is voting winter here.

There is something really special about April, May, and June in Boston. The days are finally longer, the snow has melted, and everyone has a renewed energy from Beacon Hill to Back Bay and from the North End to Southie!

Boston native and The Ringer founder Bill Simmons once devoted an entire column making the case that “Halter Top Day” in Boston is one of the best days of the year. The day, usually falling sometime in mid-April, is when the weather finally breaks, the convertible tops come down, and locals trade in their sweaters and Canada Goose jackets for halter tops and mini-skirts signifying that Spring has arrived! (This has become so popular that Urban Dictionary has actually coined the phrase “Halter Top Day.” Honest, look it up.)

The Red Sox are back in town. The smells and sounds of Fenway are as vibrant as ever. Recent seasons have remunerated fans with the serendipity and lasting memories of April ring ceremonies to revere.

HOF pitcher Tom Seaver once said: “Fenway Park is the essence of baseball.” And that essence comes back to life every spring.

The history, pride, and tradition of the Boston Marathon never disappoints. Seeing the support and encouragement the city shows all runners as they test their grit and spirit against Heartbreak Hill is something that has always made me proud of Boston. It shows the strength and character we have as a community.

The Boston Marathon is the oldest consecutively run marathon, and one of the toughest to qualify for. This standard of excellence is the measure for all runners around the world with one of the greatest accomplishments in running being to own a time that “BQ’d” or “Boston Qualified.”

And on most nights in April (hopefully May and June as well) you will find Causeway Street absolutely buzzing as the Celtics and Bruins are making their playoffs pushes.

Personally, this is where spring time in Boston means the most to me. Having been a Celtics season ticket holder for the last fifteen seasons, I have had the good fortune to be part of many of these playoffs battles at The Garden.

I am a big believer in the “Right Place, Right Time, Right Guy” theory and have been allotted many “I WAS THERE!” moments over the last ten years.

The feeling as you sit at work checking the time every half hour or so hyperexcited to get to The Garden. Five hours to tip-off.. four hours to go.. three hours..

The rush watching KG get into the zone as Phil Collins “In the Air Tonight” blares throughout the arena. The energy and explosion from a 4thqtr comeback as a Paul Pierce/”A Few Good Men” montage plays on the jumbotron: “I want The Truth” … “YOU CAN’T HANDLE THE TRUTH!”

I was THERE for all of it.

The Pierce/Lebron duel in Game 7. The “Wheel Chair Game.” The celebration from halftime on as we clinched Banner 17 on the parquet floor in ’08.

The series against the Bulls in ’09 (still the greatest playoffs series I have ever witnessed) where Rondo officially became RONDOOOO.

Game 6 against Cleveland in ’10 where we absolutely broke the spirit of Lebron and the Cavs, driving him to South Beach with our “New York Knicks.. New York Knicks” chants every time he went to the charity stripe.

The gut-wrenching 7-game series in the Finals with Kobe and the Lakers later that spring.

The beat down from Lebron and the Heat on our home court in what could have been a series clinching Game 6 in ’12 to send us back to the Finals.  The heart of our city reverberating with “Let’s GO CELTICS!” chants in the waning moments as we tried to will a Game 7 victory in Miami.

I was THERE for all of it.

For many of these moments, no matter how late it was, or how early we had to be at work the next morning we would stumble across the street to The Greatest Bar along with half of Section 5 to celebrate, process, and decompress what we had just witnessed.

Did this really just happen!? Did we really just see that?! The resounding theme on many of these spring evenings was that as a city and a fan-base –win or lose- we were always really proud of our guys and the effort they gave.

You see, sports matter here in Boston. This isn’t a city where you can just go through the motions with anything. Boston is a Brotherhood. People notice. And although basketball is my identity, the words in this column can be inserted –on any and most nights-  with the Patriots, Red Sox and Bruins as well.

I have been blessed these last ten years to invest my time, money, and energy in a team, coaching staff, and players that care about this city and this franchise as much as I do. In this day and age, when players give a damn as much as the fans, that means something.

Folks, it’s spring time in Boston again. The best time of the year! 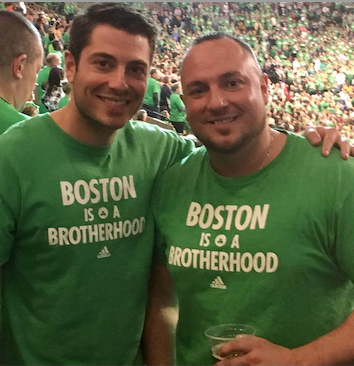 Matt Ribaudo is the Publisher and Managing Partner of BostonMan Magazine. A resident of South Boston, Matt has lived in Boston or on its North and South Shores for the last two decades. Matt owns a successful media agency in Boston and is a 40 under 40 recipient. Matt’s lifetime love affair with the game of basketball has placed him as a Boston Celtics season ticket holder for the last fifteen seasons and has provided countless moments and memories he will cherish for a lifetime.

For more from Matt, please follow him and BostonMan Magazine on all social media sites. You can also reach Matt at: matt@bostonmanmagazine.com