For about a decade I was physically, sexually, and mentally abused. The abuse started almost immediately, and my spirit was quickly broken. Afraid and not sure how to get out, I settled with the idea that I was stuck.

In 2005, I was choked unconscious by my then-husband while on our honeymoon. It wasn’t the first time he abused me, but it was the first time I thought he was going to kill me. Intoxicated and confrontational he taunted me while we walked back to our hotel room from the bar. Once in the room, he threw me on the bed, and with the weight of his body on mine, he wrapped his hands around my neck and started to choke me. There was something distinctively different about his eyes that night: they were small, beady, and lifeless, it was like he wanted me to die. Tears ran down my cheeks, the pressure on my throat was unbearable, my heart was pounding, I couldn’t breathe, and I panicked. I started to claw at his hands and arms to free myself, but that only made him angrier, and made him squeeze harder. I could feel myself losing consciousness, I couldn’t claw at him anymore, my eyes began to close, and in the darkness, I thought to myself “this is it; this is how I die.” When I came to, he was naked and passed out on the floor.

People often ask, “but why did you stay” The truth is, there wasn’t one specific reason I stayed. He had isolated me from friends and family, convinced me that they didn’t love me and that no one wanted me but him. He was controlling, manipulative, possessive and dangerous. I was broken, embarrassed, ashamed, had no self-worth, no money, and was terrified. I felt alone.

Leaving your abuser doesn’t always guarantee the abuse stops; for me, the abuse continued for years after I left. Not only did the abuse continue, but he stalked me, harassed me, and made my life hell. I lost count of the restraining orders and visits to the Police Station, and I had more sleepless nights than I had when I was under the same roof as him. He was unpredictable and dangerous; intimidating and manipulating; controlling and possessive; he was (is) a monster. Sadly, he isn’t just the monster in my story, he is the monster in many women’s stories. We had moments of peace when he was put in jail and then for a few years when he went to prison.

Surviving abuse was incredibly difficult. Not only was I battling my abuser, but I was also battling myself. Despite my diminished self-worth and lack of trust in myself, I got up every day determined to fight back. I chose to LIVE; I decided it was time to take my power back. I gradually began to talk about it more freely and began to reflect on it. I decided to pursue my dream of modeling which he had never allowed me to follow. As a big F U to him, I set out to reach my dream despite my insecurity, fear, and uncertainty. It may not have been a healthy healing mechanism, but it worked for me. For the first time, I chose myself. My confidence grew, my courage grew, I met amazing people, and I began to shine again. It was that moment when I felt life flow through me again. I was finally free and realized that my abuser no longer had power over me.

If you or someone you know is suffering from domestic violence in any form, help is available. The National Domestic Violence Hotline is a valuable resource, and can offer guidance towards next steps.

Tiffany McNeil is a mother, business-woman, wellness coach, and domestic violence survivor. Every day she lives with past traumas from an abusive man that tried everything in his power to break her. Today, she is not just surviving but thriving and is an inspiration to everyone that knows her.

PUBLISHER’S NOTE: I first met Tiffany three years ago in October 2019. Her and I developed a fast friendship and about a year into it she began to tell me some of the horrible stories about her abusive past. She expressed an interest in writing and one day wanting to share parts of her story to a larger audience with hopes of helping women -and men- recognize the unhealthy signs of a destructive relationship. Tiffany has unbelievable courage and strength, and above all a beautiful loving heart. I am proud to be her friend and honored she has trusted BostonMan Magazine as a platform to open up publicly.

She’s pretty good at car karaoke too, even though she still can’t beat me.  -Matt Ribaudo 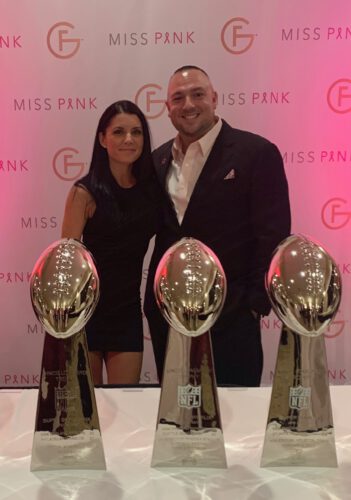