It was a Monday evening in November, the 18th to be exact, when I received the text from CLNS Media owner Nick Gelso.

“Bob Ryan has agreed to meet you. Be over at Trattoria Il Panino in North End for dinner at 6:30.”

Wait. What? THE Bob Ryan? The 5x winner for National Sportswriter of the Year? The winner of the Curt Gowdy Award from the NBA Hall of Fame? The College Basketball Writers and New England Basketball HOF member? The Dick Schaap Award winner for Outstanding Journalism? The ESPN Lifetime Achievement winner for Literary Sports Writing? The author of fifteen classic books on basketball and baseball? The man Bill Simmons refers to as the “Greatest Basketball Writer of All Time”?

Yes, that Bob Ryan. Is this real life?

As those that have read my column, watched my show, and follow on me on social media already know, my love affair with the game of basketball goes back as far as I remember.

Growing up with the Celtics teams of the 80’s -and the growth of the NBA- Bob Ryan was our voice, our eyes, our access to the Boston Celtics and for that matter the entire NBA. These were days long before the internet and League Pass; long before podcasts and 24/7 access. Long before twitter and apps that deliver alerts on every move your favorite team makes.

These were the days where -especially as a youth- you relied on only a few sources to break down what you had watched on television or listened to on the radio.  You trusted Bob Ryan to tell these stories to you and analyze what was going on for you.

As the hostess brought me to a back table in the dining room, Nick and Bob were there waiting. I could tell Nick was already a couple of martinis in, which meant he would be busting my chops throughout the entire dinner (it is, after all, the relationship we have.)

“Hi, I’m Bob,” the greatest sportswriter of all time says to me with a warm smile as I pull up in the seat next to him. 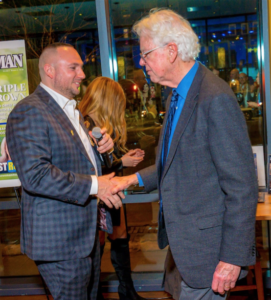 I looked over at Nick, kind of hoping he would let me gulp down the rest of his martini to get things going. He shot me a look back saying: “You’re on your own, don’t let me down here!”

The next two hours were pure euphoria. We reminisced about the great Celtics dynasties of the 50’s and 60’s. We rhapsodized about how Wes Unseld gave those talented Boston College teams so much trouble in consecutive years in the 60’s. We broke down the ABA/NBA merger and the tribulations the League went through in the 70’s. We gushed over Larry Bird and our favorite Era of basketball, the 1980’s. We talked about the “Left-Handed Game” the Big Three; and why the greatest NBA team of all time, the ’86 Celtics, championship banner also counts as one over the rival Lakers. (Celtics defeated the Houston Rockets in the Finals, 4-2 in ’86.)

I even pulled out one of my columns (BostonMan Magazine – Spring 2019) and read stuff I wrote (yes, read out loud at dinner) about the Celtics to Bob Ryan.  (Mr. Ryan was nice enough to smile and tell me I write about our game well. Nick, meanwhile, cringed/laughed at me while I did this.)

We titillated over my favorite Bob Ryan book, Forty-Eight Minutes, which happens to also be his. 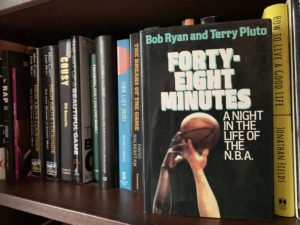 And then, as I finished my second glass of wine, I summoned the courage to ask the question:

“How would you like to write a cover story for BostonMan Magazine, Mr. Ryan?”

Without hesitation, he replied: “How about Danny Ainge?”

It couldn’t be more perfect. Ainge, the President of Basketball Operations of the Celtics, and key member of those glory teams in the 80’s exemplifies everything that BostonMan Magazine is. He was also on that ’86 G.O.A.T team.

Bob Ryan set up the cover shoot for the morning of December 11th, while the Celtics were on the road. That day there were a total of six of us at the Red Auerbach Center for the shoot and interview: Danny, Bob, Dwight (our photographer), his wife Susan, my co-host Andrea, and myself. That’s it.

I didn’t have to do much the day of the shoot. Bob had already done it all for us. Dwight got some amazing shots and we settled on Danny Ainge in front of Banner 16 -that magical ’86 team- for the cover. 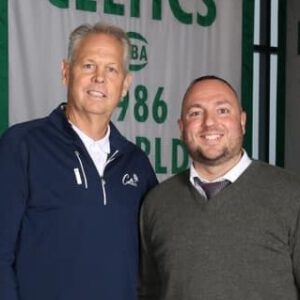 Bob and Danny then went into Danny’s office and had the conversation that led to the prodigious cover story featured on these pages.

As Andrea and I drove back from the shoot, she received a text from her brother, Jack:

“Do you have any idea what you were just a part of?!” he asked her.

“Maybe not completely,” she confessed to him. “But Matt certainly does.”

I sure do. Is this real life? 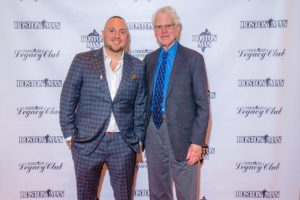