Catch Me if You Can, The Bob Menery Story

JDog Junk Removal is opening their 200th franchise here in Boston…and they’re bringing their military-inspired values of respect, integrity and trust with them. Those values have inspired a pretty stellar business model.

The idea of hiring veterans doesn’t need to be sold to business owners as a gesture of gratitude for their sacrifices. But there’s another very good reason. It’s great for business.

If you have any curiosity why, listen to R.J. Gagnon, co-owner of JDog Junk Removal’s new Boston franchise, tell you about Crazy Keith.

“When we interviewed him,” Gagnon says, “he needed help. We had a couple of concerns. Obviously he was a little older than most of our guys, doing this very physical job. And he was a Vietnam vet that came with his own set of troubles and conflicts.

“So the first thing we did was make sure that we found him a home. We found him an apartment, and we helped him get established and get into programs to help him.”

R.J. and JDog needn’t have worried.

“He is never late, he never calls in sick, and he works harder and faster than any 20-year-old on our crew. He has a nickname, Crazy Keith, because when they get done with a whole house cleanout, panting in the hot sun, Keith is still doing somersaults and flips and starting to stretch out with his martial arts moves. Those military values of completing your mission? That’s what he lives and breathes.”

Incidentally, that rubs off on team members.

“He is like a role model to some of the younger civilian guys. ‘How is this 62-year-old Vietnam vet out-hustling me? I’m 20 years old and he is out-maneuvering me out there!’”

R.J. Gagnon’s father, Ray, is a retired Marine Corps Master Gunnery Sergeant. The two are taking command of JDog’s 200th franchise, located in the Framingham/Worcester area. The growth of JDog, which originated in Philadelphia, has been swift and decisive…in no small part because of their hiring and franchising practices. 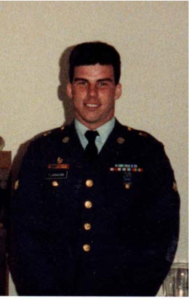 Jerry “JDog” Flanagan, co-founder and CEO of JDog, was a wire dog in the Army, hence the nickname. He has never needed to be told the value of employing someone who has served in the toughest of environments. He knows the work ethic ingrained in a military uniform.

“You’re 100% accountable for your actions,” he says. “You learn how to respect people, you learn how to say yes sir, yes ma’am. And your work schedule is out of control. You’re going to work more hours than you’ll ever work in a civilian job.”

It was great life training for the workplace. “I was able to get to work before everybody else, I stayed later than everybody else, I volunteered for all the crappy shifts. It separated me from the average civilian.”

Flanagan learned, as most entrepreneurs do, that his work habits would better benefit his family if he owned the business himself.

With his wife Tracy, he started a kids party center in 2007. It went under in the recession of 2008. Without a college degree, he needed a better way to support his wife and daughters, so he researched recession-proof businesses. One of them was junk removal.

He started handing out postcards offering junk removal service to neighbors. The ones that hired him were immediately impressed.

“I had been doing it for about two weeks, when someone mentioned that I was doing the job so fast and on time, and I was in a polo shirt and was clean cut. They wanted to know where this came from. I said, well, I was in the military, so I’ve always been able to outperform anybody because of my work ethic.

“They said, ‘You should market that!’ So I slapped ‘Army Veteran’ on my business cards and stuck it on the side of my jeep.”

The response immediately showed that he was onto something. “The phone started blowing up and everyone started using me in the area. I lasted probably eight months, and I realized that I needed helpers.

“I went to the VA, and I hired compensated work therapy patients that were struggling with drugs and alcohol. Combat veterans that were coming back and couldn’t find work. I was rotating different guys into my trucks, putting them on the other side of couches and carrying items.

“They felt great about it, and we were able to run the business with almost all veterans initially. I realized that we had something big here, and my wife said we should franchise this thing. We sold five franchises, and I realized other veterans wanted to be part of this.”

As Flanagan says, it’s a hand up, not a handout.

“It’s not just about philanthropy. These are real businesses. They make real money, real equity for families. When you have that and you have fun doing it, and you’re putting veterans to work, and the community’s getting behind you…it’s just a recipe for massive success.”

His customers “just have a lot of respect for military, either side of the aisle, it doesn’t make a difference. I had no idea that it was going to be that powerful. I didn’t realize that the competitive advantage of being a military veteran business was that strong.”

So why don’t more veteran-owned businesses trumpet military service, such as with the stunning camouflage-painted trucks like JDog uses? Gagnon thinks it’s a reluctance to use their service for personal gain. A reluctance that both he and Flanagan believe is misguided.

“I see it as a way to communicate that we’re respectful, that you can trust us, and that we carry ourselves with integrity,” Gagnon says. “Veterans became different people the moment they signed up. They’ve served everyone, and that brings with it some weight and value.”

“There’s veterans out there that own a business, you’d never even know they’re a veteran. They’ve gotta figure out how to get their brand out there, because it really works.

“Customers are longing for someone to open the door up in their home, and say thank you, good morning sir, look them in the eye, do a really good job and have respect, have integrity and have trust. And the company was founded on respect, integrity, trust.

“They’re going to use us over and over again. They’re going to tell their friends and family. They tip us, they make sandwiches, they leave their doors unlocked for us to go in when they’re not home. It’s insane. There’s not one other service model out there, plumbers, painters, you always feel like you’re getting ripped off. In our case, it’s the opposite.” 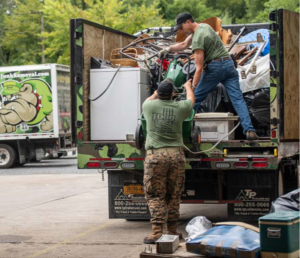 JDog is not only a phenomenal success story for veteran employees and franchisees, they’re a tremendous boon to communities they serve, both by helping local veterans and protecting the environment.

Between 70% and 80% of what JDog collects, according to Gagnon, never reaches a landfill. They use a process R.J. calls the three Rs: re-purpose, re-sell, or recycle. Still-usable items, such as furniture, get donated to charities helping veterans in the area. For items that are re-sold, proceeds go to funding charitable functions. Other items get recycled, including paper, cardboard, glass, plastic, wood, and metal.

Everyone benefits. “Those programs are part of the reason why they decided to go with JDog. People know that it’s not just a junk removal company. We’re actually doing something good here.”

Their 200th franchise in the Cradle of Liberty, while obviously momentous, is just another stop on the freeway. JDog has signed on for 300 more franchises, including a few more in the Boston area.

In the space of just a few years, Jerry Flanagan and his warriors have built an extremely lucrative business with one simple premise…that military values of respect, integrity and trust bring an almost unbeatable competitive advantage to an enterprise. More importantly, Flanagan, his wife Tracy, and his business family like the Gagnons, have found a calling.

“The model that started out as a way of survival has turned into a massive inspirational company that’s changing families and lives,” Flanagan reflects.

“We’re bringing veterans back together under one ethos of brotherhood. And that gets me up very early every day. It just doesn’t stop, because if there’s a veteran out there in the United States, my obligation is to put them in business wherever they are in the country.”

Judging from JDog’s astounding growth, it looks like Americans are on board with the plan.