Leaders of the New School

When you hear that Boston Bruins legend Ray Bourque owns a restaurant, you may expect it to double as a shrine to his Hall of Fame hockey career.

You head downtown and Tresca isn’t too difficult to find, just a few steps off Cross Street up famous, busy Hanover Street on your right. You’re just a six-minute walk from TD Garden, the home of the Bruins and Celtics. But, more importantly, you’re right in the thick of Boston’s “Little Italy,” with the smells of sauces cooking and pastries being baked filling the air, while local business people, residents and tourists cross paths as they hustle and bustle at all hours of the day.

You walk in the door and, instead of finding a raucous sports bar atmosphere, you find elegance. The walls are painted a warm shade of grey and are decorated with framed black and white photographs of North End events and landmarks commissioned by Tresca’s owners. There’s a picture of a feast here, a photo of Paul Revere’s house there.

You have a choice now. You can make a right and saddle up to the classic dark wood bar facing two large-screen televisions. Or maybe you want to dine in the lower level, the Hanover Room, which seats 24. You can warm up next to the fireplace or sit near the windows, which are opened when the outside temperature allows, and enjoy some people watching while you dine.

But, if you’re still looking for hints of Ray Bourque in the décor, you make your way upstairs to the 75-seat Tuscan Room. The same elegant white tablecloths, the same atmosphere-setting gray paint on the walls, but off to the right there’s a photograph a little different than the others. This photo involves sports, and it involves one of the most iconic moments in Boston and hockey history.

If you’re any type of Boston sports fan, you’ve seen the photo, and you remember the moment it depicts. It’s Dec. 3, 1987, and the Bruins are retiring Phil Esposito’s No. 7. Bourque has worn No. 7 for the first eight seasons of his illustrious NHL career, and few in the old Boston Garden know what’s going to happen after that number is retired. Bourque makes one of the classiest gestures ever, and peels off his sweater to reveal that he’ll now be wearing No. 77 (a number that would eventually be retired by the Bruins and the Colorado Avalanche). The crowd goes wild and, as those who know Esposito well always say, the chatty, former-Bruins great was rendered speechless for possibly the first time ever.

This is it, this is the first strong hint of Bourque’s presence in Tresca’s four-man ownership group, and this photo adorns the entryway to one of the North End’s most iconic tables –Table 77. Underneath the sign identifying Table 77 are the glass doors that lead out to the balcony. A table for two awaits, overlooking Hanover Street with views of Boston in all directions.

“It’s a great table,” Bourque told BostonMan Magazine during a 30-minute chat at Tresca’s bar. “Engagements, anniversaries, birthdays, so many things happen out there on that table in the summer when we have three seatings. All summer long, that’s a tough table to get that you really have to book way in advance to sit there.”

Table 77. It’s not a penalty box or a dressing room stall or anything that hints at hockey – except for the understated allusion to the name and number. It’s great, but understated, much like Ray Bourque the player, magnificence without a lot of flash. 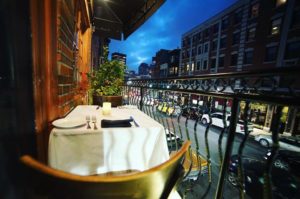 Ray Bourque, now a 57-year-old resident of Boston’s North Shore suburbs, joined the Bruins as a 19-year-old rookie in 1979, after being selected eighth overall in that spring’s NHL Draft. That was the start of a career that lasted 1,612 regular-season NHL games, and featured him accumulating 1,579 points (410 goals, 1,169 assists). He’s still the NHL’s all-time leader in points by a defenseman. He won the Norris Trophy as the league’s best defenseman five times, and earned a spot on 17 NHL postseason All-Star teams. But in order to win the Stanley Cup, Bourque had to agree to a trade to Colorado in 2000. One year later the Avalanche won the Cup, and captain Joe Sakic handed it to Bourque first. What happened next was a testament to Bourque’s beloved status in Boston. With the Bruins’ blessing, the city held a rally for Bourque and the Cup, even though he had just won it with another organization in another city. The fans turned out to show their love.

“I mean what other athlete could win a championship in another city, and bring back the Cup and get 10,000 people to come out and celebrate?” Peter Weber, a second of Tresca’s four owners, pointed out.

After retiring as a Cup champion, Bourque didn’t spend a lot of time idle. “Falling asleep in the afternoons to Oprah” didn’t appeal to him and he missed have the regimented life of a professional athlete.

“It was an adjustment because you’re so scheduled, and once September comes around you’re ready for camp, and then from that point on … and even during the summer, you wake up, you work out, that comes first,” he said. “And then it’s all right, probably go play golf and hang out with the family. But workouts always came first and it was like bang, bang. But then when you retire it’s like ‘OK, no more scheduling.’ You play golf as far as you can until the fall. It’s beautiful usually around here. Fall and spring the golf is great.”

He made sure to spend extra time attending and coaching at his kids’ (sons Ryan and Chris, daughter Melissa) sporting events, and traveling with his wife Christiane. Pretty soon, Bourque had a role networking with fans in premium seating at Bruins games, and was a spokesperson for what was then known as BankNorth. 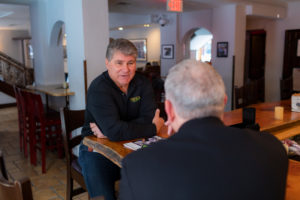 He even scratched the coaching itch a little as a consultant for his former Bruins teammate Mike Sullivan, who was coached the Bruins in the 2003-04 and 2005-06 seasons and has gone on to win the Stanley Cup twice with the Pittsburgh Penguins. But Bourque wasn’t ready to plow back into the full-time life of someone working at the sport’s highest level.

“I didn’t want to be traveling like I was, so getting back into hockey I didn’t say I wouldn’t get back into it at that point, but it wasn’t going to happen right out of the gate,” Bourque said.

“We had no expertise in owning a restaurant other than trying to make it work and surviving,” Bourque recalled.

They made it work and survived for about a decade. Then a confluence of circumstances led Bourque to look for new partners. In July 2016 a new era in Tresca’s history started with Bourque, Weber, businessman Bill Galatis and executive chef Richard Ansara forming a quartet of owners who all play their roles the way Bourque’s best teammates did in the Bruins’ best years.

Bourque knows the competition is stiff in the North End with what he estimates to be “80 Italian restaurants within one square mile.”

But Bourque and his partners treat the restaurant business the way he approached hockey, always looking to improve, and always striving to be the best.

“If we don’t make it work at our location, it’s probably something we’re doing. So we try to do the best we can, and we have a plan, and so far, so good,” Bourque said.

Weber handles marketing, Galatis handles much of the business and Ansara handles the cooking, featuring Northern and Southern Italian specialties.

Unlike many athlete-owned establishments where the only trace of the athlete is a picture or some memorabilia, on many nights at Tresca, you get Bourque in the flesh.

“Especially during Bruins’ seasons, we get a good crowd coming in to see him,” Ansara said. “And even if he’s not here, it brings a whole different dynamic to the restaurant. You can watch a Bruins game here knowing it’s Ray’s place. He makes a huge effort to come in and meet and greet, and he enjoys it just as much the guests do, which is great.”

Bourque always did everything it took to win, and having him mingle with guests is a big part of Tresca’s ability to differentiate itself.

“I mean you try to put the right people in place … and knowing that I make the effort to try to get here because I know that there’s a connection. … So, I know especially when the Bruins are playing, I know there’s going to be a decent crowd in here before the game. So, I like to come in and walk around, and just chat and connect with people, and that’s what I bring,” Bourque said.

The two TVs above the bar are the touch he insisted on because he wants people to be able to watch sports before they head out to attend a game just a couple blocks away, or stick around to watch the game with him and other diners. Bourque is also instrumental in frequent events at Tresca, with several of his ex-teammates and other Boston athletes (David Ortiz, Drew Bledsoe) taking part in wine tastings.

As far as memorabilia, Bourque doesn’t have as much as you’d expect.

“When you think back, the stuff that I could’ve kept or some people say you should’ve kept. But for me I wasn’t a collector. … I’ve got stuff, I know in my head what I did,” he said. “There’s certain things you keep and that are special and that you have in a special place. But it’s not all that much. I’ve got a Stanley Cup ring that took me forever to win. I never wear it, it never comes out, hardly ever, because it’s so big. …

“But the experience of winning it is one that I’m so happy that I got to experience.”

Bourque recently started the Ray Bourque Family Foundation, which holds three events each year (a golf outing, a 7.7K run and a gala) to raise money for any number of charities and organizations. For almost as long as Tresca has been in business, Bourque’s wife has owned and operated the Maison Esthetique Christiane Bourque Spa in Danvers. Bourque still skates regularly with a group of friends, and even competes with the Bruins Alumni team during the winter. There are also hockey games to attend (both his sons started the season playing with Bridgeport in the American Hockey League) and three grandkids to dote over. He still skates with the Bruins Alumni and makes several road trips a year with former teammates and other member of the Bruins family.

When it comes to Tresca and the restaurant business, Bourque and his partners get the scores every day when the ratings on the social media sites roll in, and the quartet determines the strategy to make sure there’s a preponderance of positive reviews and a miniscule number of razzes.

The mission, however, always stays the same.

The chance to meet Bourque in person goes a long way toward providing that unique dining experience that assures you will.

From The Publisher | UnMasking Evil

Tales of Boston.. And Beyond