Catching Up with Greg Hill

February 22 marks the 40th Anniversary of the Miracle On Ice, still today regarded among the greatest, if not the greatest moment in sports history. BostonMan caught up with three key players from Team USA…Boston University alumni Jim Craig, Jack O’Callahan, and Mike Eruzione…to talk about the achievement and its aftermath. 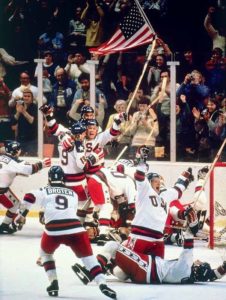 The puck rose off Mike Eruzione’s stick and soared past Vladimir Myshkin’s outstretched pad. An arena full of 8,500 fans, along with a newly inspired nation, erupted.

For the first time, in this game and against this team, the U.S.A. was ahead. With exactly 10:00 on the clock.

Ten minutes. Against a team capable of six goals in that kind of hockey eternity.

But this was still the Soviet Union team, arguably the greatest hockey team ever assembled. This team didn’t often go half a period without putting a puck in the net. The score, and the momentum, could change on a dime. 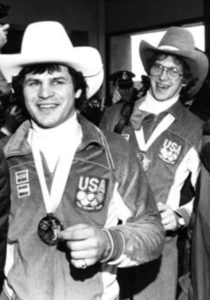 And they had ten whole minutes to correct this aberration, this trailing of a nation that wasn’t known for producing world-class hockey players.

Forward Rob McClanahan, in his diary later published in Goal magazine, would call it the longest ten minutes of his life.

“We’re like, oh my God, that’s a long time against these guys,” defenseman Jack O’Callahan remembers.

Ten minutes from immortality. Survive these ten minutes, and you will someday be symbolically credited with taking down an Empire, armed only with a hockey stick.

Hold off the Reds for ten minutes, and forty years from now, the eyes of strangers from sea to shining sea will still tear up in emotion when they meet you.

Unlike everyone else on Planet Earth, Herb Brooks was not shocked.

He built this team for this moment. He expected them to be here. From behind the bench, he brought a wave of calm to a heart-stopping situation, repeating three simple words:

Do what got you here. This is no fluke. You’re ahead in this game for a reason.

“Most teams,” Craig reflects, “once they got ahead of the Russians, did a prevent defense type thing. And the Russians crushed it all the time. But we didn’t. My strategy at that time was, don’t tie the puck up, don’t give them a chance to regroup, keep it going.”

Eruzione agrees. “In the last ten minutes, the Soviets had I think, seven or six shots on goal and three of them were from outside the blue line. As Robbie said, it was a long ten minutes, but boy, we played really well in those ten minutes.

“We had great team speed, great conditioning, our conditioning was off the charts. And you get solid goaltending like we had from Jimmy, and now you’re in every game that you can play.”

This was no aberration. These boys really were exceptional hockey players, who paid their dues through months of backbreaking training, under a single-minded coach.

Not everything in Disney’s outstanding Miracle film is completely accurate, although the players will tell you it’s generally on point.

One deviation from reality is its much more sympathetic portrait of a coach who was about as sentimental as a kick in the groin. O’Callahan remembers a teammate (Phil Verchota, he believes) saying, “Boy, they really softened Herb up for the movie.”

“Yeah, he was a lot friendlier in the movie,” Eruzione agrees. “Herb didn’t care if you liked him, and there were a lot of times we didn’t like him. But it was important that we respected him, and there never was once a time when we didn’t respect him. Here’s the option, you deal with it or you quit.”

Like his teammates, Eruzione lived in perpetual fear of being kicked off the Olympic team. It was, they agree, one of Brooks’s favorite motivational tools.

O’Callahan says that “even Mark Johnson, who was our best player, leading scorer…Mark would probably tell you that even he wasn’t sure. Herb was like, if you don’t want to work hard at this and you don’t think you need it, fine. I got 200 other guys that want your spot on this team.”

Craig says the movie conversation where Brooks informs him that he’ll be replaced with Steve Janaszak didn’t happen, but it could have.

“It made sense, because if that was a way to motivate someone, Herb would do it.”

Through intense psychology and conditioning, Brooks assembled a team of players that would…and could…step up their game in response to fear. It was essential, especially if they were up a goal against the Soviets with ten minutes to play.

“You always hear the stories that Herb wasn’t looking for the best guys, he was looking for the right guys,” Craig says. “Every one of the players that were on our team had a makeup of what I call a winning underdog.”

Yes, an irate Herb Brooks did make his team skate following a tie with Norway, unlit arena and all. The actual event didn’t mercifully end with Mike Eruzione shouting, with every last ounce of his remaining energy, “I play for the United States of America!”

Eruzione sometimes tells people that it did, because he doesn’t like to disappoint them. But in reality, the drill lasted close to 90 minutes, and as Eruzione jokes, “it wouldn’t have taken me an hour and a half to figure that out.”

He does remember that Brooks successfully made the point.

“We did waves of five guys at a time, and we did them for about 15 minutes; he blew the whistle and we stretched, and then he blew the whistle and we did them again. Mark Johnson smashed a stick against the glass, throughout the skate a lot of guys were doing that. And Herb said, ‘If I hear another g***damn stick break against the glass, you’ll skate till you die!’

“We did a few more, he brought us in the locker room and he said, ‘If you play this way again tomorrow, you’re going to skate again.’ We beat Norway the next night 8-0.”

O’Callahan had several discussions with Miracle director Gavin O’Connor about the script. He recalls that O’Connor learned about skating in darkness almost in passing from O’Callahan.

“None of that was in the movie,” O’Callahan says. “It wasn’t in the script, so I told him about it. He goes, ‘How the f*** is that not in the script?’ He’s like, that’s gotta be in the movie. I said yeah, it was a pretty big watershed moment for our team.

“I have a picture of Herbie standing there holding a whip from 1980. All that stuff then ends up in the movie.”

“Herbie never settled, and it was non-negotiable,” O’Callahan says of their hard-boiled coach.

Brooks, who we sadly lost in a car accident in 2003, is said to have cried following the Soviet game. But he quickly shook it off. There would be no ‘Whatever happens, I’m proud of you’ speech before Finland.

Just the opposite. He informed his team that they would take a loss to their “f***ing graves.”

Magazines have space limitations, but the contest against Finland shouldn’t be overlooked. The Finns weren’t pushovers, and led 2-1 after two periods.

But on strengthened legs from a long post-game skate weeks earlier, the U.S. scored three goals in the third and took the gold. 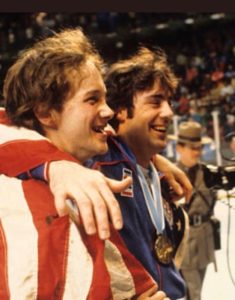 Ten years later, Roger Waters of Pink Floyd would perform “The Wall” at the remains of the Berlin Wall. On Christmas Day 1991, the Soviet flag was lowered from the Kremlin for the last time. Today the Soviet Empire is an increasingly distant memory. The 1980 U.S. hockey team is not. In the four decades since, O’Callahan, Eruzione and Craig still experience gratitude for ‘beating those Commie b***ards’.

Jack O’Callahan was an American history major at Boston U., and he spent a great deal of time explaining the giant disconnect in America in 1980, especially between generations, to O’Connor for the film. Much of that appears in the movie’s opening scenes. 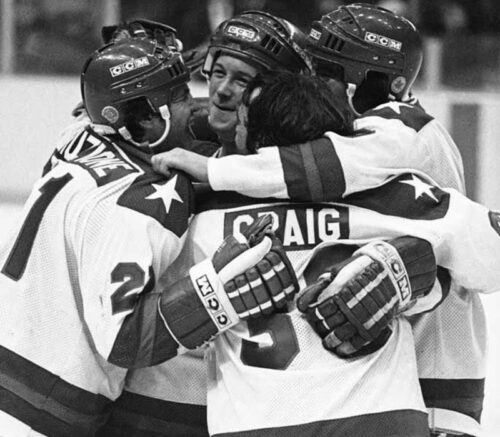 He now lives in Jacksonville and is a senior managing director at Ziegler Capital Management, a firm based in Chicago where he played six seasons as a Blackhawk.

He hasn’t, he says, had a single negative conversation in 40 years. 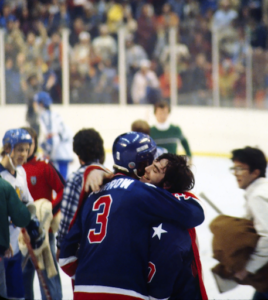 “I would say the most prevalent messaging for me…predominantly the discussion is about family. It was all about, ‘I remember watching that, I didn’t think my dad knew how to cry and I remember seeing him bawling his eyes out. You know, he was a 45 year old Korean war vet, crying his eyes out over a fricking hockey game.’”

Mike Eruzione works for Boston University and still lives in Winthrop. He and his wife founded Winthrop Charities, supporting local families and causes. His coming book, The Making of A Miracle, was written for one reason, he says. It’s so his grandchildren know that he did more in his life than play hockey for two weeks in Lake Placid.

But Rizzo understands that he’ll forever be known for those two weeks.

“For 40 years, I come across people all the time and there’s a smile on their face. Or sometimes I’ve had people come up to me and start crying, because the moment meant that much to them. I must have sent out 15 or 20 pictures today to kids, you know, ‘I wasn’t born in 1980 but I saw the movie, my grandfather and my aunt and uncle told me about it, can you send me an autographed picture?’

“I live in Boston and I root for the Patriots; a lot of people don’t like the Patriots. But when it’s the Olympic games, it’s a nation that feels a part of it.”

Jim Craig has also written a new book, titled We Win: Lessons On Life, Business and Building Your Miracle Team. His group, Gold Medal Strategies, assists businesses in motivational training. The book, he says, explains that Lake Placid wasn’t a miracle and why.

Craig treasures having become friends with Bobby Orr after idolizing him as a kid. Today, he tells the story of being idolized by a young Dave Grohl, leader of one of music’s biggest acts.

“As our team was going to light the cauldron at Salt Lake City, he was there as a performer. He called me up and we got a chance to talk. He was really, really excited. So here’s this guy from the Foo Fighters, as we’re talking to him, he goes to me, ‘Jimmy, I’m going to sing a song. I’m going to dedicate this song to you.’

“And it’s ‘My Hero’. So that song became obviously my favorite.”

Jim Craig doesn’t think the gold medal is the best thing that’s ever happened to him. That sounds astonishing, but given his explanation, it isn’t surprising at all.

“This year we had our granddaughter Shae, first time my wife and I would be grandparents. That’s the next greatest thing. My daughter got married in the year before that. My son got married and had me as his best man at the wedding, which my father was for me.

As a grateful nation continues to treasure the memories 40 years later, millions of Americans can share our goaltender’s outlook.

The Miracle On Ice wasn’t the best thing that happened to America.

But it certainly was one of the best things.