Publisher’s Note: BostonMan Magazine Legacy Club Member Sarah Lovell is an amazing woman. In 2015, she published her memoirs telling her story of love, pain, redemption, survival, faith and never giving up/believing in yourself. One Body is Sarah’s story of physical and emotional scars that ultimately teach invaluable lessons. Through her memoirs, podcast, and other platforms Sarah hopes to teach others how to keep standing up after life’s devastating blows knock them down!

Below is an excerpt from One Body, My Story of Trauma and Survival, which can be found here on Amazon. 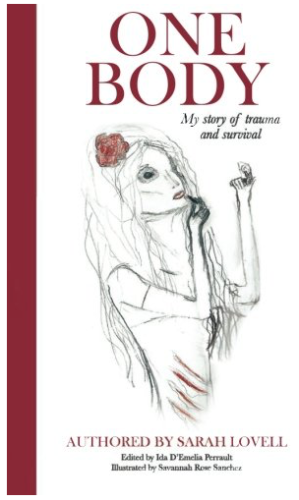 All I wanted was a nice guy who cared for me and treated me nicely. I didn’t want to be hit for having an opinion. It wasn’t my dream to the floor and screamed at. I needed love. I deserved it. Didn’t every girl? Didn’t I?

He didn’t allow me to see any of my friends. Eventually I became completely isolated from everyone in my life. He then introduced me to a girl with whom I was allowed to hang out. He had been driving this girl to escort calls. I knew about her; sometimes I would call him when he didn’t come home, and he would be there at her house or at her friend’s house.  Friend?  I think she was a coworker, not a friend. But I couldn’t say anything like that. I was never allowed to question Rocky’s doings. If I did, I always ended up bruised, bleeding, or both.

It was that girl who took me to a bar, pulled me into the bathroom, and gave me one of my first lines of cocaine. It was a welcome relief from the pain of the abuse I was experiencing. The mixture of the fancy drinks and the drug was liberating. I was intoxicated, but more than that, I was flying free for moment in time.

It seems like this was his plan all along. Find a young girl. Break her down to nothing, then introduce her to people who live in the world of drugs and prostitution.

This sounds like a pimps M.O., but Rocky never tried to traffic me. Perhaps it was an attempt to get me addicted so I would lose custody of my son. Or, it could have just been an attempt to control me., to keep me in line. “Keep me in line.” That makes me laugh now. Maybe he was just an asshole, who knows. There may not have even been a plan, but I believe there was something. He told me, You can leave, but you will not take my son with you.” I kept trying to leave, but someone was always there, watching,  reporting  back to Rocky. When I left with my boy, Rocky would find me. I was so screwed up in the head that I would go back. 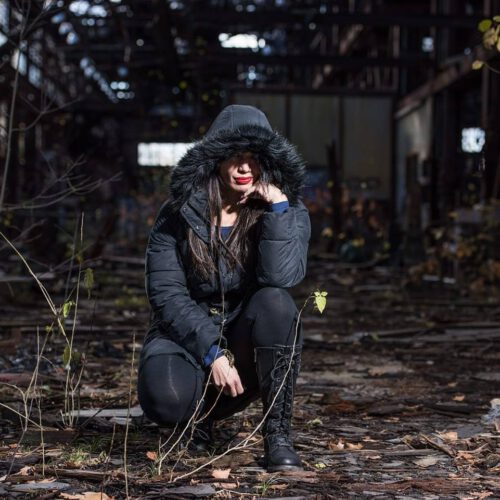 Eventually I couldn’t take the abuse any longer. I escaped from my abuser, but without my son. I called my father secretly and asked him to meet me at a store a couple of miles down the road. The drive would take nearly an hour, so I had to time my departure carefully. I told Rocky I was going to the store, and he gave me a time limit. I promised to come back within the time allowed, but I did not go back. I never would.

After I left Rocky, I didn’t stay at my parent’s house for long. I ran away again and ended up hiding at my friend’s house. It was maybe an hour away from the basement I had shared with Rocky. This friend and I were getting ready to go out and she went outside for a minute. I looked out the window and saw a car pull up. She walked up to the car window, and the person inside handed her something, which I supposed was drugs, the usual thing. She came back up and said her friend wanted to talk to me. I figured I might get something out of it, and I trusted her, so I went outside and walked toward the car. As I got close, I realized that Rocky, my ex, was in the back seat.

I started to back away, but he said, Get in the car I only want to talk. “

I was such a dummy. I was standing close enough to the car that he was able to grab my hand and pull me into the car. He told me to keep my mouth shut, or he was going to kill all my friends. He yelled out the window that if anyone in my friend’s house said anything to anyone he was going to shoot all of them. I knew he had access to guns because he once held a shotgun to my leg and said he would blow my leg off.

He told the driver, “You know what to do.” They took off with me in the car. He immediately began punching me while he held my hair in his clenched fist. He kept asking who I was f—ing and punching me in the stomach saying that if there was a baby in there he was going to kill it. He told me they were going to shoot me and dump my body somewhere. I knew this was true. He continued to beat me,  and I fought back, knowing this was it; I was going to die. I began to pray, “Please, God, spare my life.” Just then, I heard sirens. We were being pulled over?

He hissed in my ear, “When that cop comes over here you tell him we are just having a disagreement or you will never see your son again. Do you understand?”

I could see out of the corner of my eye that the officer was getting closer to the car I thought to myself, if you want to live, you have to make a move. Don’t be afraid, just go. As soon as he got to the car he asked what was going on. I unlocked the door and yelled, “He’s trying to kill me!”

I scrambled out of the car and ran behind the police cruiser. I cowered there, sobbing hysterically. More cruisers came, and rocky and the driver were arrested. The police found a gun in the car, and I was safe for the time being.

I knew what he meant I wouldn’t see my son. Rocky would do everything in his power to keep me away from him. And he did. He used a notarized statement I had signed, under duress, to win custody.

Sarah Lovell is a single mother and recovering alcoholic and drug addict. She’s been sober for fifteen years, and in that time, she went back to school, became a licensed massage therapist, and opened her own business, among many other positive ventures. Lovell and her daughter were featured in A Path Appears, a documentary series based on a book written by Nicholas Kristof and Sheryl Wudunn, and produced by Show Of Force. The series aired on PBS. Lovell hopes their participation in the series will help bring awareness to the plight of trafficked women and children in the United States. Her memoir is the story of a woman’s brutal early years, subsequent recovery, and attempts to make amends for past wrongs. She hopes that One Body will inspire other women (and men!) to find the strength to keep going in the face of seemingly insurmountable challenges.

The Book Shelf | Can’t Turn Back

Matt Ribaudo
From The PublisherStarting 5The Bookshelf