I think it’s safe to say that most Bostonians love brunch! Especially around this time of year after “second winter” is officially over, the lilacs are blooming and restaurant’s patio and deck seating begin to open. This year, we are all especially looking forward to dining outdoors and supporting our local restaurants. Now I don’t know about you, but it’s not officially “brunch” for me unless I have a Bloody Mary in hand with some sort of food stacked on top of it or dangling off the side of the glass. Yes, I’m one of those people. I’m completely obsessed with Bloody Marys! I even have an Instagram account dedicated solely to this creative cocktail, @BloodyMaryMeee. It’s safe to say I know what I’m talking about when it comes to this meal in a glass/hangover cure. So without further ado, here are a few of my favorite restaurants I frequent to brunch on some Bloodys!

I originally discovered Robert’s when I was taken there on a date back in 2015. I immediately noticed the beautiful marsh views you can see from almost every table in the restaurant, so gorgeous! I also love the breezy deck on the second floor where you can smell the fresh, ocean air. Although Robert’s does not specifically have brunch, if you know me then you know brunch for me is more like lunch hours– any time after 1pm. (Don’t even ask what I consider dinner hours!) Lucky for me Robert’s opens at 11:30am, so the basic bruncher in me is game on. I didn’t know what to expect when I first ordered their Bloody Mary since I wasn’t at a restaurant specifically known for brunch. (Just incredible seafood!) I’m happy to say I certainly was not disappointed! Robert’s refreshing Bloody Mary came with a huge (super fresh) shrimp cocktail, olives, lemon, lime and a pepper. It was the perfect appetizer to have before my meal! Now every time I’m shopping in Kittery, ME I HAVE to go to Robert’s for a Bloody.

I was introduced to Baxter’s Boathouse in summer 2019 while on a day drinking type vacation day. I’m familiar with Hyannis because I grew up spending summers down that part of the Cape and because my father has just retired from the Hyannis fire department after 30 years of service. I had heard of Baxter’s many times, but for some reason never made it there until last summer. How I regret that! It is one of those restaurants that you absolutely have to visit if you’re in Hyannis. It’s directly on the water and it is the ONLY restaurant on the Hyannis Harbor where you can pull up and dock your boat! If you dine on their deck, you can wave to boats passing by and maybe toss a couple french fries to the lurking seagulls…I may or may not be guilty of doing that. While dining at Baxter’s, one of the very first things I noticed on their menu (and displayed in their restaurant) was that they have their own award winning Bloody Mary mix! It’s called “Captain Ben D. Baxter’s Binnacle Bloody Cocktail Mix”. The mix is sold in many different restaurants and retailers throughout Cape Cod, you can find out where exactly to buy it at BaxtersCapeCod.com. To no surprise, the Binnacle Bloody is Baxter’s top selling cocktail and once I tasted it, I learned why. Tangy, slightly sweet with a hint of spice, very refreshing and MADE for day drinking. The cocktail can be served many different ways and when I saw they offered a version with a piece of bacon and a shrimp cocktail on top, I was sold. If my memory serves me correctly, I’m pretty sure I ordered three… it was that good! My Hyannis Bloody Mary day drinking quest was a success thanks to Baxter’s Boathouse. 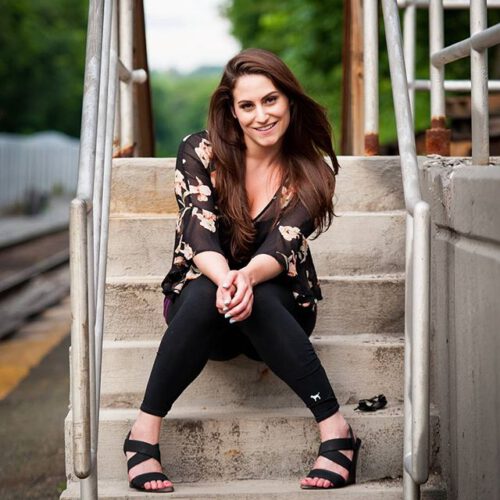 Melissa Kleamenakis is a SAG-AFTRA affiliated actor as well as a Boston TV Personality and food/lifestyle influencer. You may recognize her from the NESN television shows Wicked Bites and Dirty Water TV or from Instagram, @MelissaFromBoston. A Salem State University alumni and Boston native, Melissa loves all things New England and can never say no to some good seafood!

Power In Family: The Story of Kelly Brabants

Grit & Determination: The Realty Concierge Ascends to the Top

Costa Finds a ‘Break’ as Sports Cards See a Resurgence