Leaders of the New School 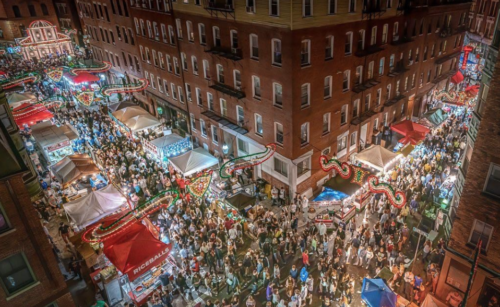 Now that summer is finally upon us, one of the most highly anticipated (and popular) street festivals of the season will be returning once again to the the North End in August. After a virtual hiatus due to last year’s pandemic, people from all over the world are excitedly returning to the streets of the North End this year to celebrate the return of the many processions, feasts, religious services and blessings happening all summer long.

The first event to kick off this year’s festivities was the Santa Maria Di Anzano Procession with a Mass held at St. Leonard’s Church in the North End and will culminate on September 19 with the Santa Maria Di Anzano Procession. During the month of August, you can check out the Madonna Della Cava Feast (August 6-8); the Fisherman’s Feast of the Madonna Del Soccorso di Sciacca (August 12-15); the Centennial Feast for Santa Lucia (August 22); St. Lucy’s (Santa Lucia) Centennial Feast (August 26) wrapping up with St. Anthony’s Feast (August 27-29).

Our very own publisher, Matt Ribaudo, will be the Master of Ceremonies for the Meatball Competition at this year’s Fisherman’s Feast. “This is the oldest continuous Italian festival within the North End of Boston in its 111th year,” said Domenic Strazzullo, president of the Maritime Society, which hosts the Fisherman’s Feast. “Even though we didn’t have the outdoor festival last year, we had to get creative and it turned out really well. The feast started with our ancestors in Sciacca, Italy and it broke off to include Brooklyn, New York; Norristown, Pennsylvania and Boston. Each city does its own procession on or around August 15. We only have a few fishermen left in the club, but we pay respects to those fishermen who used to fish off those piers of Boston during the festival. This year, we are excited to be back because the nostalgia was taken away last year with the pandemic. People love the street festival and taking part in something so special.” 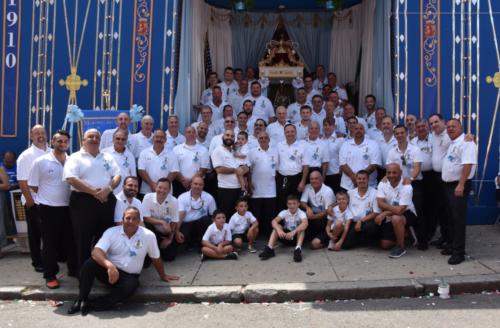 The Fisherman’s Feast is an annual event that began in Boston in 1910 and dates back to 16th century Sicily.

Based on the devotion of the fishermen from Sciacca (Sicily) to the Madonna del Soccorso (Our Lady of Help), this year marks the 111thedition of the festival. When Sicilian fishermen immigrated to America in the early 1900’s, they brought their traditions with them, which are now deeply in grained in both the North End and the entire city of Boston.

“The Feast provides something for everyone,” said Strazzullo. “It is a family friendly feast where we provide rides and games for the kids; beer gardens for the adults to relax, disco nights on Friday and Saturday to show off your dancing side; and free entertainment nightly.”

For Strazzullo, the Fisherman’s Feast truly is a family affair. He shares co-chair duties with his brother Louis, and his cousin Kenny Palazzollo is the President of the Madonna del Soccorso Society on Lewis Street.

“My involvement started when I was a little kid with my grandfather making sure I had a flag to carry for the procession,” Strazzullo reminisced. “I then became a member at 18 years old and slowly climbed up the ranks. When I was 33, I became the co-chairman of the Feast and have been putting our festival together and keeping our family heritage alive for the past nine years.”

Strazzullo continued: “Every year the Feast brings all of our families together, like a Christmas celebration. Once it is over on Sunday night, we consider it the end of summer and get ready to bring out the Christmas Trees!” he added with a laugh. 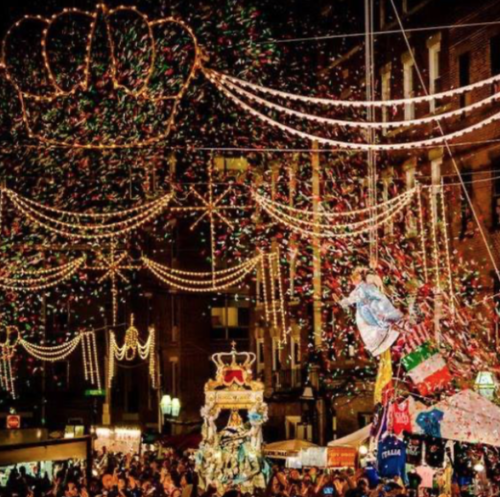 The Madonna del Soccorso legend is based around her power to provide hope, healing, and help.

In 1300, a young Augustinian monk named Nicolo Bruno lay bed-ridden, severely ill and crippled with a broken neck. One night he was awoken with a vision from a woman of radiant beauty who told him: “I am The Madonna del Soccorso di Sciacca (The Lady of Help of Sciacca). I have come to your town of Sciacca to aid and assist the people.”

As legend has it, she then proceeded to tell Nicolo Bruno to get up. She healed his neck and cured him of his illness. Bruno devoted his life to spreading the message of the blessed virgin.

As miracles continued to happen in Sciacca, the town folk -realizing how fortunate they are- built a statue in honor of Madonna del Soccorso. Transportation of the statue was difficult, however, due to the enormity of its structure. Realizing they could help, the fisherman of the town got together and carried the sculpture from location to location. Till this day –as tradition has it- only fisherman are allowed to carry the statue.

On August 15, 1907, the Vatican decreed Madonna del Soccorso the “Patroness of Sciacca.” As a result, the fishermen hold a huge feast on the Assumption (August 15) every year, a tradition that now has deep roots in Boston’s North End as well.

In Boston, the Feast traditionally starts on Thursday when Madonna del Soccorso is moved from her home in the Fisherman’s Club to a chapel in the middle of the Feast. It culminates on Sunday with the spectacular “Flight of the Angel.”

After a 9-hour procession during the day, Fisherman’s Club members bring the Madonna statue home to North Street where two side angels on balconies recite an Italian devotion followed by the entrance of a flying angel from a third story window coming down from the sky to meet the Madonna del Soccorso. At the end, confetti rains on the scene in an astounding street celebration.

Other highlights over the weekend include a variety of cooking demonstrations, hosted this year by Boston DM Show co-host Andrea Cadigan, and The Annual “Best Meatball in Boston” competition, emceed by Ribaudo. 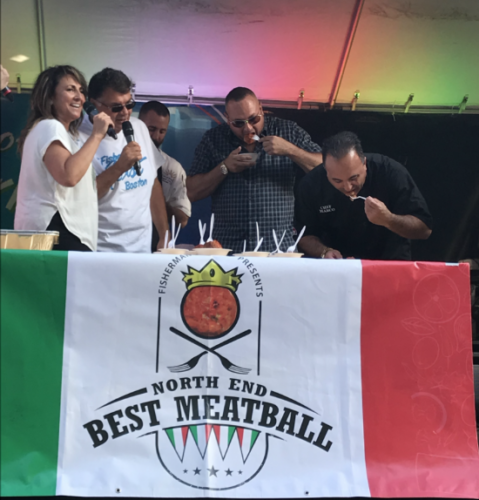 Like so many other businesses, committee members had to pivot their way of thinking with the pandemic last year to avoid public gatherings.

“It was so sad,” said Christian Guarino, St. Anthony’s Feast’s Executive Board President. “This year, we are hoping to come back as big as it was in 2019, which was the 100th anniversary when 250,000 to 300,000 people attended the festival from all over the world. There will be a Mass at St. Leonard’s Church with Cardinal Sean O’Malley this year and there will also be a procession and an old style festival. We are just really excited to bring the tradition back and honor St. Anthony the way he should be honored,” Guarino continued. 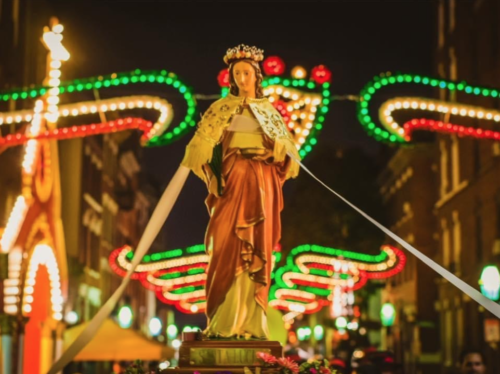 “The Feast of St. Anthony has grown year to year and this year, we are expecting over 100 vendors with novelties, live entertainment, culinary demonstrations, including the best meatball contest and games for the kids,” said Joe DiGirolamo, chairman of St. Anthony’s Feast. “It is still an authentic and traditional festival and I think it’s going to be a breakout year. It’s free admission and you don’t have to be Italian to attend and have a good time.”

The tradition and customs of honoring Saint Anthony of Padua in the North End of Boston date back to early part of the twentieth century and the large numbers of southern Italian immigrants that reached the shores of Boston at that time.

These southern Italians brought with them customs and traditions that they celebrated in their homeland for centuries. A group of men from the small mountain town of Montefalcione, Avellino, just east of Naples in the Campagnia region of Italy founded what is known as today as the San Antonio Di Padova Da Montefalcione, Inc. 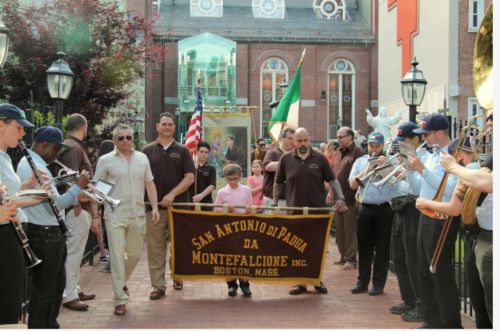 Since 1919, as is done in Montefalcione on the weekend of the last Sunday of August the Saint Anthony and Saint Lucy Societies and the people of the North End celebrate the Feasts of Saint Anthony and Saint Lucy. Named the “Feast of all Feasts by National Geographic Magazine, it has now become the largest Italian Religious Festival in New England.

Each year, the highlight of the Feast is the ten hour procession of the Statue of Saint Anthony through the streets of the North End. This is “accompanied by devotees, numerous marching bands and floats. The Statue of the Saint returns to his chapel as confetti and streamers cascade from the rooftops.”

Boston’s North End has been affectionately labeled “America’s most beloved neighborhood” in many sectors of the globe for generations. With the return of its beloved festivals for the summer of 2021, that tradition and claim continues to only grow stronger.

For more information and a schedule of events, visit here.

The Boston Anthem Singer Belts out a Dream