With new ownership, new management, a new location, and a new attitude Aston Martin Boston has set out to -yet again- add more accolades to its storied legacy. BostonMan Magazine sat down with the management team of Aston Martin recently to learn more on how they continue to re-establish the standard in luxury automobiles.

Even if you’re unfamiliar with the name, it’s likely you’ve seen one of Aston Martin’s iconic cars.

In the 1964 James Bond film Goldfinger, for example, a dashing and dapper young Sean Connery—donning a pressed suit with a cigarette in hand—drove the legendary Aston Martin DB5, which some considered “the most beautiful car in the world.”

With the power and torque of a racing car, and the opulence and elegance of the Lamborghini or Ferrari, the British-based Aston Martin redefined the paradigm of what it meant to drive an elite and exotic machine.

And with the relocation of Aston Martin Boston—which has changed ownership, location and sales management while temporarily sharing space with the Cadillac dealership of Norwood—the keys to one of these beauties are dangling an arm’s reach away.

The Aston Martin and Lotus franchise, purchased by Michael Argiros and Michael Xidea—who also own Cadillac of Norwood—has assembled an elite service team of professionals to sell the vehicles, consisting of Ramirez, Director of Sales Seth Blais and Service and Parts Director Steve Oldford.

“Jamie and Steve are rock stars,” said Blais. “I’m looking forward to riding their coattails as we become one of the top dealers in country.”

From its genesis, Aston Martin has focused on the aesthetic, according the company’s website.

Founded in London in 1913 by Lionel Martin and Robert Bamford, the two men set out to design cars with a racing pedigree and a love of beauty. Martin and Bamford, who originally worked selling cars for Singer, joined forces, designing and racing their own vehicle at Aston Hill in Buckinghamshire, England—hence, the name.

Their first cars debuted at French Grand Prix in 1922 where the cars’ performance dropped jaws, and the two men made it a goal to continue to produce cars that were “faster, more powerful, thrilling, comfortable—and more beautiful—than the previous,” writes the Aston Martin website.

The company, however, floundered somewhat until David Brown, an English Industrialist, took the reigns in 1947 and brought it to prominence, blending luxury comfort with racing performance.

Using Brown’s initials as a nameplate, the DB2 first premiered in 1947 with accolades from many in the industry, introducing the company to the global stage.

As the vehicles continued to press the edges of innovation, the company flourished on Brown’s watch, releasing the aforementioned DB5 in 1963.

“It’s the drivability, the feeling of luxury behind the wheel and the excitement the exhaust note brings when you shift,” said Ramirez.

To this day, Aston Martin remains a marquee name among exotic cars.

Anyone who has ever scratched their navel through an Introduction to Marketing course could tell you that the product is only part of the equation. A competent and qualified sales team is also essential to success.

And Aston Martin Boston has assembled just that.

“We’re ambitious and have a lot of fun,” said Blais. “We are going to be buying a lot of pre-owned exotic cars (not just Aston Martin) and we want to attract new customers in Boston and nationally.”

For Blais, the story leading up to his position at Aston Martin—while not always pretty—is the story of a man who faced and beat the odds. “Four years ago, I was living in a halfway house in Maine with only a bag of clothes to my name,” he said.

Blais battled an opiate addiction and is currently in recovery. He started his career in automotives in his early 20s at Lee Honda in Auburn, Maine, and during the last decade spent time working at various dealerships and learned about the industry through multiple marketing companies.

All while darker forces were in play.

After confronting his addictions, Blais spent pre-COVID-19 times giving back to the fight against a rampant opiate crisis, speaking at schools, medical conferences, executive outings and even in front of Maine’s congress members.

His message clear: No one is immune, and we need to help each other, a message that translates to his sales team as well.

While in recovery and living in Boston for the past two and a half years, Blais has focused on educating himself in the exotic car industry and said he grateful for the opportunity to work for Aston Martin Boston.

“I’m fortunate to be assembling and supporting an amazing team of people at Aston Martin Boston,” he said. “I owe that to great the great relationships I’ve built in the industry and people like Mike Xidea and Mike Argiros, who was willing to invest in me.”

Blais’s humility and his appreciation for his colleagues stand stark.

“I mostly defer to Jaime and Steve,” he said. “They are the best and have forgotten more about cars than I’ll ever know.”

A mother of three, Jamie Ramirez has been in the car sales business for seven years after interviewing for a position at Ferrari of New England following some nudging from a former colleague.

Ramirez landed the job and worked at Ferrari for five years.

“What did I know about cars? Nothing,” said Ramirez, who was working at James Cooper Law Office at the time when she was hired. “[Ferrari of New England] is where my passion, appreciation, knowledge and drive to sell exotics started. Ferrari will always have a special place in my heart.”

Ramirez went on to work for McLaren Boston then became the brand manager at Lamborghini Boston, where they became one of the top five dealerships in New England and sold out of its stock.

But the company was “going in a different direction,” which Ramirez said opened the door to become the Sales Manager of Aston Martin and Lotus Boston.

“I instantly knew this was the right home for me when I met the team, especially the owners,” she said. “It was clear to me that relationships and the overall experience come first. Not the sale.”

“We have the best service director this is,” said Ramirez. “This offers clients a peace of mind, great communication and white glove service.”

With 25 years of working in the automotive industry and a degree in Automotive Technology, Olford—whose passion for cars was sparked by his father taking him to car shows in the Boston-area as a child—worked as a technician for a few years post-college before moving into the service/workshop management at Ferrari/Maserati of New England.

And for Oldford, his position at Aston Martin and Lotus transcends the paycheck.

“I take pride in providing our clients with the best quality service and making our dealership an enthusiast’s destination,” said Oldford.

As of now, the future of Aston Martin Boston is looking auspicious. Blais said that they plan on opening their own location in Norwood soon while expanding their sales.

“The prior franchise was underperforming on the sales side, and we plan to finish 2021 in the Top 10 nationally for the brand,” said Blais.

The dealership has also introduced a new product, the DBX—an SUV that opens the demographic to more women, business men and a younger clientele.

“We are selling a lot and expect it to be a huge hit,” said Blais.

In the meantime, the team from Aston Martin Boston will continue to strive toward excellence.

“As a team, we are dedicated to providing the overall experience that separates us from other elite dealerships,” Ramirez said.

And for any budding international spies, skilled in espionage and courting romantic partners, if you’re looking for something sleek to drive, try Aston Martin Boston. They’re eager to help you. 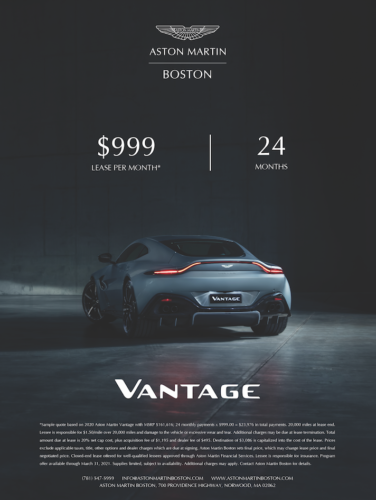