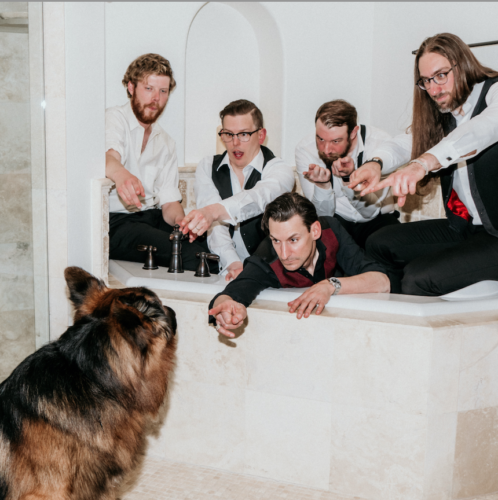 Being a musician is not easy. Running a full-fledged business as an artist is even harder. Add in five other men, some satirical humor, and a dash of multi-genre tunes, and you have a party. It’s safe to say that we wouldn’t change a thing.

Milquetoast & Co. is made up of James McAndrew (lead vocals & guitar), Daniel Zangari (bass guitar), Kyle Bocchieri (drums), Ben Parrish (guitar), Sam Oatts (horns), and Joe Engel (cello). While the band has changed configurations over the years, the ensemble we’ve created is as tight as it gets. When a band chooses to write, record, and tour together, success is dependent on keeping the group on the same page. Luckily, the camaraderie that we showcase isn’t fabricated- we genuinely spend so much time together that we often find ourselves trading work for play because they are one and the same.

When Milquetoast & Co. began in Boston years ago, we didn’t know what it would become. What we did know was that we wanted to create music that was instantly recognizable and different from anything else our audience would hear. It was a no-brainer to always use classical instruments in our music, as we’re all trained musicians with a passion for the genres we dive into for each release. We can’t be categorized simply as alternative rock or indie because of our choice to infuse strong Americana and jazz influences into our music. We also never want to be confined to the definition and tenets of genres because we enjoy exploring new concepts and styles as much as possible.

Our upcoming single “The Bricks” encapsulates everything we want to share with listeners going from the crazy year of 2020 into 2021 and beyond. We take pride in our instrumentals and this song really lets them shine. Our vision for “The Bricks” was to describe how we can wall ourselves in with our problems until they surround us, until they’re all we know. We often pair these thought-provoking concepts with instrumentals that can be described as cinematic and eclectic to balance out our message with our delivery. With this new single debuting on September 10th, we can’t wait to take it on tour alongside our new album, expected in late October. The music we’ll be sharing, including “The Bricks,” is some of our most experimental work so far and we can’t wait to see our audience’s response after being unable to play live for so long.

Our two most recent releases are “Done/Undone” and “Mindful Maze,” which are two songs that have lived in a pressure cooker for far too long. We reimagined these songs to fit what we truly wanted them to be. That started the process of dropping this new album, piece by piece, until the full release is ready. By staggering our singles that will soon find a home on our new album, each track gets the chance to shine.

Our creative process is rigorous but also such a rewarding experience. We write and produce everything we create from start to finish, so everything we share with our audience comes from a place of self-reflection and the overflowing desire to create. From the original hooks and lyrics to the cover art, we are the primary hand in making the vision come to life. There’s no one else who knows this band better than the people in it, and we never let ourselves become derivative of our influences or past work.

If we could give any advice to developing artists, whether their outlet be paper, instruments, or the stage, it would be to excel at stepping outside of the boxes that have been built for them. The real fun of our career comes from being our authentic selves and letting the music do the talking. Our music may not be for everyone, but our crowd understands what we’re creating and is always coming back for more. Finding the people that are willing to ride along with you through the evolution of your craft are the most valuable people you will ever meet as an artist.

Boston is a melting pot of people and we wouldn’t be the band we are today without the city’s influence on early Milquetoast & Co. releases. Everything is a building block, and the city was the place where those first steps were dreamed up and executed. From the way we present ourselves to the body of the work we’ve created, we continue carrying the Northeastern roots of the band with us, and we’re better for it.

We’ll return to Boston on December 6th for a show at City Winery and tickets can be purchased through our website. We can’t wait to experience the energy and love from the town that started it all.

Calling itself Milquetoast & Co. (pronounced milk toast and company), this Boston-bred, Denver-based sextet mingles high-intensity, angular elements of Americana with equal parts rock and blues and a touch of pomp and pageantry. Their songs tell the tales of life; embracing the joy and sorrow of complex human relationships while tipping a well-tailored cap to the moments of beauty and irreverence we all share. Originally based in Boston, Milquetoast & Co. self-released three albums prior to parting ways for a series of “it seemed like a good idea at the time” reasons, from parenthood to world travel. Waiting for the time and circumstances to be right, the band re-established itself, deep in the heart of the Rockies. Now, with a fully re-formed lineup, Milquetoast & Co. are picking-up where the love affair left off.

Street Magic, More Than A Name

The Enthusiast | One More Time

The Enthusiast | From Boston to Nashville

The Enthusiast | How I Ended up with Unreleased B.I.G Records