“To speak of whiskey in the U.S. and not to talk of Rye is truly a sin against the imbibing history of this country.” ~ someone not famous, probably me

There was a time in this country that when you said “whiskey, please” you were ordering Rye whiskey and only Rye whiskey.  Why Rye, you ask? Well, even though it is closely related to both barley and wheat, rye will grow in poor soil conditions and holds up to colder climates.  The other gains are better suited for beer and bread respectfully, rye is O.K. for both, but its flavorful talents were found to lay elsewhere.

Our early forefathers were hard-working, inventive, and to put it nicely, thrifty. Anything that was not used, consumed or bartered had to be converted to a preserved state.  You cannot get much more preserved than alcohol, plus it is a great deal easier to carry around for trade than a wagon of grain! (And lot more fun, too!)  Rye fit the bill, mash bill anyways, to be planted on poorer soil areas of the farm and what was not used for staples would be combined with any other surplus grains and distilled.

Rye’s popularity grew along with our budding democracy. Our county’s first President, Mr. George Washington, himself was a Rye whiskey distiller. And so it went on, rye being converted to whiskey in the eastern states and sold to the expanding county.  As a matter of fact, up until prohibition Rye was king amongst distilled spirits in the U.S.!  Even during prohibition Rye whiskey was being smuggled in from Canada.  The downfall for Rye really came as prohibition ended. Most of the eastern distilleries were out of business or barely holding on, while other whiskeys like bourbon, some who were allowed to remain open for medicinal purposes had production back up and running with aged stocks. Rye languished for a while until only a few brands remained and seemed to be destined as a historical footnote.

That was until a few years back, now there seems not enough Rye whiskey to keep pace with a growing demand! What happened to reverse this wind of ill-fortune? Well, for one, you had the resurgence of the cocktail culture and those mixologists, (I prefer bartenders, but that’s for another time), started looking at other spirits besides vodka to make drinks. The more savory and less exploited whiskeys of the world grabbed their attention.   Next, the whole whisk(e)y category exploded! Starting with single malts and as those prices seemed to rise because of its popularity; people were drawn to bourbon as a relative bargain. Rye started to gain some momentum then because scotch drinkers liked that, unlike bourbon, it lacked the sweetness and relied more on the spicy and dry side of the whisk(e)y profiles.  Finally, those cutting edge mixologists started looking back at old pre-prohibition cocktails and many called for Rye whiskey!

So, now here we are in the Rye of this apocalyptic storm!  Everyone now seems to make Rye, from young to old, from o.k. to great, and from moderately priced to sky-high.  To help you slash through the myriad of Rye whiskeys, I thought I would give you my trifecta of Rye! I picked these three because they span a good range of Rye profiles in tastes, wide diversity of geographical sources and all are readily distributed throughout New England.

Let’s start in our own backyard! The first Rye is distilled right in Gloucester, Massachusetts by Ryan & Wood. When Bob Ryan and this crew started their distillery they found that the Rye Whiskey category was being slighted by the major suppliers, favoring Bourbon production, with only a couple of Rye labels available to consumers. Plus, Bob felt Rye Whisky was historically accurate and geographically appropriate for Massachusetts and the colonial states. Bob knew as we discussed earlier that rye grain is a short season, cold weather crop, and can stand harsher soil conditions. The rest as they say is history! When I recently asked Bob to describe his version of Rye he painted a pretty picture. “We enjoy the flavor on the sip and the barrel oak showing on the breath. As we bottle at 86 proof, this will leave a bit of room for those notes to appear when just a bit of chill is used. I, myself, can be seen by the B-B-Q, a couple of our Rye Oak Barrel chips smoking in the coals, while I sip Ryan & Wood Rye with just a bit of a quality Ginger-ale.” I’d like to add that Ryan & Wood Rye is also great in a Ward 8 cocktail!

The second Rye is from Kentucky, right in the heart of bourbon country and made by the only active father and son master distillers! Jimmy Russell has been distilling for over 60 years and his son Eddie for only slightly less than that, so when they put their family name on a product, it has to be good. Russell’s Reserve 6-year-old Rye barrels are selected only by Jimmy or Eddie after they have been aged in a heavy charred American oak and picked from the choicest locations in the rickhouse. The color is reminiscent of a Corojo wrapped cigar while the nose has notes of toasted almonds, vanilla, and a hint of allspice. All of these flavors repeat on the palate plus the addition of some caramel and finishing with cinnamon. The real treat of this Rye is its smooth character.  Yes, there is warmth from the alcohol, but no real burn that one might expect from a spicy Rye. I also think it makes a great old fashion!

The third and last Rye is a sourced whiskey that originates from our friendly neighbors to the north, Canada.  Crafted in small batches, Masterson is a 100% Pacific northwest rye, distilled in an old-fashioned pot still using only pure glacial water from the northern Rockies!  The resulting spirit is then aged in perfectly charred white-oak casks for over ten years to produce a truly exceptional Canadian born whiskey.  This process gives Masterson’s a delightfully unique taste profile, which includes a trace of pepper and spice, along with a soft lingering sweetness.  Although there is a decent supply of this 10-year-old Rye in New England, it is a limited run. Here is a great Rye for the base of a very nice Manhattan!

And remember; There’s never a bad day for good whisk(e)y! 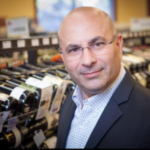 Ryan Maloney is the owner/operator of Julio’s Liquors, his family’s business since 1974. Ryan is one of only a handful of individuals in North America to have achieved membership with The Keepers of the Quaich. The Keepers of the Quaich is an exclusive and international society that recognizes those that have shown outstanding commitment to the Scotch Whisky industry, and is widely regarded as the highest honor received in the industry.

A Dinner Remembered (But Mostly the Whisky)