Born and raised right in Winthrop, former Boston Bruins Ice Girl Deanna Buonomo grew up as more of a tom boy than a girly-girl. From playing street hockey with her family to catching every B’s game the family could, Deanna grew up not far from Logan airport in a world that revolved around two things: hockey and family.

So it’s no surprise she wound up skating on that very ice she loved watching the major league games on growing up. “We used to play street hockey in the yard, and I have thirteen cousins (more than most of them are boys), so I always got the end of the stick where I would have to stand in the goal in the little pink dress that my mom would dress me in and they would all just shoot the hockey puck at my face!” says Deanna, who told us actually applied five times before being accepted as a Boston Bruins Ice Girl (never give up!).

Yet as she learned, being an Ice Girl is far more than just tossing tee shirts. Much to her delight, Deanna found that being an Ice Girl means becoming a larger part of the Boston athletic community through working with various charity organizations, supporting the team at promotional events, and so much more. Off the ice, Deanna fell head over skates in love with Boston Red Sox pitcher Austin Maddox, and has combined her love of giving back to her community and love for her boyfriend in one. “Over the winter, we got to go to Tufts and visit all the children that were fighting illnesses and were going to be in there for Christmas,” she explained, and how being able to bring joy to the children brought them as a couple happiness as well. 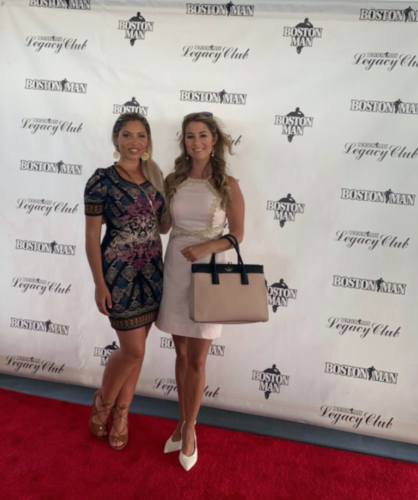 BosBabes co-hosts Brittany Baldassari and Emmalyn Anderson on the BostonMan Magazine red carpet. The BosBabes show is available every other Monday for live streaming at 8pm.

Want to learn more about Deanna Buonomo & keep up with local athletes in Boston? Check out The BosBabes show this Monday, August 26th featuring Deanna. Make sure to then tune in to The BosBabes Show every other Monday at 8pm, and check out Deanna’s and all BosBabes guests full stories at www.BosBabes.com.