THE DOGS OF CHERNOBYL

TWO of Boston’s most dynamic organizations are teamed up on Sunday October 2nd, to help raise funds and create awareness for individuals battling Parkinson’s Disease when BNEG (Big Night Entertainment Group) features a host of amateur boxing matches put on by Punch4Parkinson’s, a Boston based non-profit that specializes in utilizing the movements of boxing workouts to help reverse the effects of the otherwise debilitating condition.

Ryan Roach, who started P4P in 2015, says the showcase was his biggest ‘Fight Night’ to date; something he has been holding 2-3 events of a year raising the necessary funds to cover costs and support expenses with training the ‘Parkinsons Warriors.’

“In seven years we have raised over $1,000,000 and supported over 400 Warriors that battle Parkinson’s each day,” Roach explains. “The annual cost per Warrior for boxing support is close to $5,000.”

He continues: “We call it boxing, but they’re actually doing a boxing work out. They’re not sparring or anything, but we do treat them like fighters, training for a fight. We pay their memberships for the boxing gym for the whole year, because medical companies don’t look at it as a form of physical therapy. Boxing’s pretty expensive.”

Parkinson’s Disease is a progressive neurodegenerative disorder that affects the brain and causes a progression of symptoms including tremors, slowness of movement, limb rigidity, as well as gait and balance problems. The cause remains largely unknown and there is no known cure.

While Parkinson’s itself is not fatal, disease complications can be very serious. This is a big reason the positive results Parkinsons Warriors have been experiencing through their workouts could be game-changing in future protocols to combat the condition, Roach says. 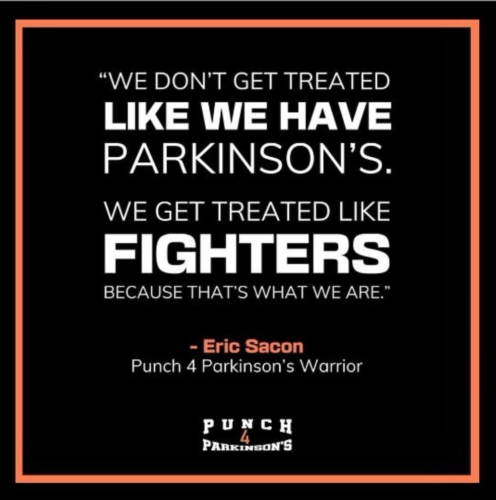 The Big Night Fight Night consisted of 18 exhibition matches by locals who have been both honing boxing skills and raising sponsorship monies for Parkinsons Warriors throughout the year. The bouts were made up of three, one minute rounds with each participant’s hand being raised in victory at the end of the ‘fight’ regardless of outcome. (Note: the fight card is not individuals with Parkinson’s condition. They are participants who have raised money for the warriors battling Parkinson’s.)

“It’s incredible what the fighters have been able to do for this benefit,” Roach gushes. “They’ve all trained in basically a simulated fight camp to prepare for the event. These are your everyday folks too with regular jobs and families that made an unbelievable commitment to get into fight shape while raising money and selling tickets. Without them, none of this is possible. That’s why we don’t ‘score’ the bouts the way a traditional boxing match does. With what these guys have done, everyone is a winner.”

He then adds with a smile: “But don’t get me wrong, even though these are exhibitions, those men and women are in their fighting.”

Gage Wealth Advisors in Newton is the title sponsor and have been working closely with Roach to help provide an ultimate experience for this and future P4P events. “We are thrilled to be entering this sponsorship partnership,” they recently announced in a statement.

“This is such an unbelievable cause, and beautiful event,” Gage’s Miriam Crispo, who led off the exhibitions with a heartwarming video montage put together by her company, says. “We are super excited to continue to evolve the Punch 4 Parkinsons/Gage partnership.”

Roach echoes the sentiment: “Gage Wealth Advisors is an incredible local business that have made a profound impact for years in and around Boston’s communities. It’s an honor to have them on-board as our title sponsor.” 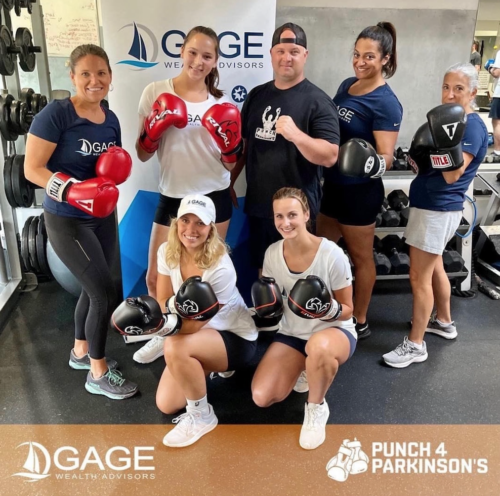 IN ADDITION to the exhibition bouts P4P has put together a stacked entertainment card guaranteed to keep everyone in the audience captivated throughout the evening.

World renowned hip hop violinist Rhett Price, fresh off of his ‘Sophisticated Ignorance’ national tour, greeted fight fans with an array of his hits as they entered Big Night’s lush arena. He delivered an in-ring performance for the first hour, with an encore that came during intermission, certified as one of the highlights of the evening.

“I have always wanted to perform at a boxing event,” Price says. “It’s a special honor for my first one to be benefiting an organization that is doing the amazing work Punch 4 Parkinsons is.”

Lowell’s Irish Micky Ward, boxing royalty in Boston, will be sitting ringside in support of the P4P Warriors. 2022 marks the 20-year anniversary of the first two bouts in Ward’s iconic trilogy with Arturo Gatti, which includes their epic 9th round on May 18th, 2002 at Mohegan Sun; widely regarded by most pugilist experts as the greatest single round in the history of boxing. 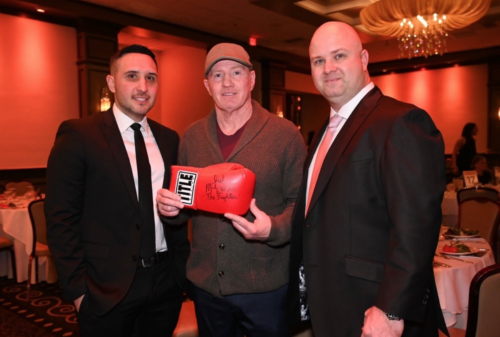 Former heavyweight title holder and boxing HOF Lou Savarese, who has shared the squared circle with the likes of Mike Tyson, Evander Holyfield, Riddick Bowe, and James “Buster” Douglas over the years will be making the trek up from Houston to help champion the P4P Warriors.

Meanwhile, a host of Boston based celebrities and influencers will also be in attendance, making various appearances throughout the evening. Among the faces rumored to be in the crowd -and perhaps even lacing up the gloves- will be: Boston BE A MAN, Tommy Guarino, Kevin Cooney & Ash DeMato, Mr. Monday, and Soufiane ‘Lil Boss’ Boutrig.

Kiss 108’s Justin Aguirre will be the master of ceremonies and ‘The Boston Anthem Singer’ Todd Angilly will be kicking off the evening with a stirring rendition of The Star Spangled Banner.

BUT MOST IMPORTANT, Roach points out, will be the numerous Parkinsons Warriors in attendance tonight answering questions, taking pics, offering up smiles, and showing off their 2-3-1 punch combinations (cross/hook/jab) they’ve learned with the help of the Punch4Parkinsons organization.

“They are after all,” he says. “The reason we are all here.”

Limited tickets are still available for Fight Night at Big Night Live. Doors open at 3pm and the first bout is at 4pm. To help support Punch4Parkinsons and the Parkinsons Warriors by attending this evening, please purchase tickets here. 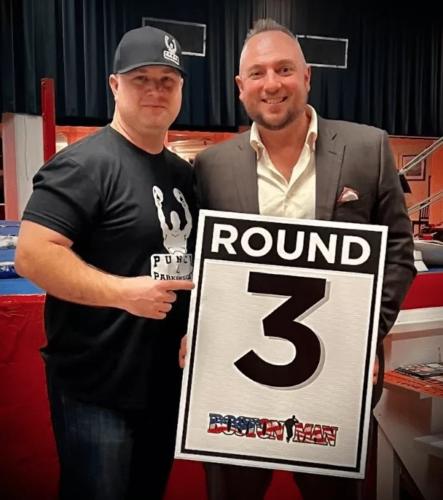 The Naked Truth, LIVING as a Domestic Violence Survivor