“Insanity is doing the same thing over and over again, but expecting different results.” -Albert Einstein

The New Year’s fitness movement is insanity. Millions of people, riddled with guilt from overindulging during the holidays, capitalize on the fresh start January 1st provides by adopting stringent diet and exercise regimens. Gyms are packed for the month. Then, the “new year, new me” mentality loses its momentum. It’s common knowledge in the fitness industry that by Valentine’s Day–or the day chocolate becomes a food group–most resolutioners abandon their memberships and fit ambitions. That is, until it’s the end of December, and once again, the same people vow that next year will be “the year” actual change happens.

If you’ve been caught in this maddening cycle year after year, read on to learn how to rethink your resolutions, and make changes that last.

DO: Set goals based on performance.

DON’T: Set goals based on the scale.

Achievable fitness goals consist of variables you can control. If you plan on running five miles three days a week, you either get it done or you don’t; it’s 100% up to you.

It is incorrect to assume the same level of control applies to the number you see on the scale. The time of day, in addition to the amount of water you’ve drank and hours of sleep you’ve gotten, are among the several variables that contribute to whether you’ll hit your weight loss goal for the week or month on a given day. Flawless execution of a diet and exercise plan doesn’t necessarily equal the scale budging, and that’s plain discouraging. Moreover, in the unfortunate (but very possible) event that you experience the same disappointing scenario multiple times, chances are you’ll jump ship altogether.

By crafting a performance-based fitness resolution, the benefits are threefold: physical activity will become habitual; you’ll feel a sense of control over your results, diminishing the likelihood of you quitting, and, if the intensity of your training sessions and diet put you in a caloric deficit, the weight will come off.

DO: Create a paper trail of the days you did (or didn’t) follow your plan to hold yourself accountable.

ex: Schedule each weekly gym session, and have a visual system of  “checking the box” that you went.

DON’T: Just say you’re going to follow your plan and hope for the best.

ex: “I’m going to meditate for 10 minutes every morning.” *Reviews previous week’s progress on Sunday* “Maybe I meditated on Monday and Tuesday? No, Wednesday.”

Unless you hire a coach, there is no one to whom you have to answer when it comes to sticking to your plan but you. Self-accountability comes from keeping a written or computerized log. If you were hosting a fundraiser in May and your goal was to raise $200k, you’d be tracking your progress toward that number diligently, right? Fitness goals are no different. If you find yourself unable to follow your plan week after week, you’ll have a record of that and will be able to adjust accordingly. If after a month you find that you didn’t slip up once, you’ll be able to look back with satisfaction and aim higher with confidence.

DO: Review your past fitness history to determine realistic and attainable goals.

ex: “Since I haven’t followed a strict lifting routine since college, my goal will be to get to the gym twice a week for the first month. Then, I’ll reassess.”

ex: “I haven’t followed a strict lifting routine since college, but my goal is to compete in my first bodybuilding show this summer.”

It’s tempting to drink the proverbial New Year’s Kool-Aid. Those 365 days ahead appear to be a blank slate, full of unrealized potential and unlimited possibilities. I am a huge proponent of dreaming big, but not at the expense of creating a solid foundation. When starting your journey toward your ultimate goal, set yourself up for success by establishing incremental, short-term goals. Focus on lifting twice a week for a month, then three days per week the second month, and so on. I admit that this process is less thrilling than going from a couch potato to hitting the gym twice a day six times per week, but we are creatures of habit; change too much too soon, and we’ll backpedal back to the familiarity of the couch. 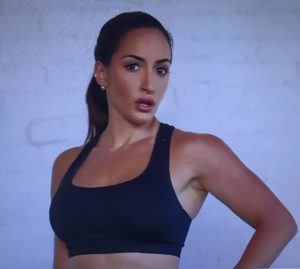 Laura Alessi is a certified personal trainer running her own business in various locations around Boston. Her first foray into weightlifting was on her father’s Bowflex at the tender age of twelve, and the rest was history. She has nearly a decade of experience in the fitness industry, having worked at age 16 as the youngest wellness coach on staff at her hometown YMCA. She also has competed in five NPC shows in the Bikini division, either winning or placing second in her height class.

Starting 5The Next Level

The Next Level | Your Dreams Are Limiting You

Margaret Cresta
Starting 5The Next Level

Gordie Gronkowski
Starting 5The Next Level

Victoria Diamond
The Next Level

The Next Level | Make Your Mark