The Enthusiast| Both Sides of the Stage: 35 Years of Boston Rock

Eras of my life have been captured by the stickers placed on my cars. For example, when I was in college, I had a Grateful Dead “Steal Your Face” sticker on the back windshield yet wondered why I was pulled over on a monthly basis.

Now, as a 44 year-old husband and father, I have the NPR sticker I received for my listener donation during a spring fund-drive. Again, it perfectly frames this mundane era of my life.

In my late-20s and early-30s, however, in the heyday of the Red Sox/Yankee rivalry, the Nissan Sentra I drove had a simple-but-poignant “Yankees Suck” sticker on its back bumper. For the record, I was seldom pulled over while driving in New England with such a bold proclamation above my tailpipe.

On the top of the rectangular sticker, against a white background, the word Yankees appeared in bold, navy-blue letters while inversely, below it, the word Suckstood out in white letters against a navy blue background. It was the same logo I saw on many of the t-shirts being sold around Fenway Park in the late-90s and early 21stCentury—occasionally there would be a “Jeter Swallows” on the back—but I never paid much mind to the design or the sales.

Until the story unfolded for me.

ESPN’s wildly popular 30 for 30 documentary series branched out into a Podcast (30for30Podcasts.com), and the second episode of its first season—it’s now on Season Four and entirely enthralling—is titled “Yankees Suck” and it tells the story of four college students from the hardcore punk scene around Boston who, from 1999-2004, capitalized on Red Sox fans’ pain and frustration, as well as the ubiquitous chant of the consonant phrase, to make an undisclosed amount of cash—although it is estimated to be in the hundreds of thousands.

The story starts with the tortured Boston back story and the list of names that live in infamy in Red Sox lore: Babe [expletive] Ruth, Buck [expletive] Dent, Bill Buckner (although 1986 really should’ve been hung on Calvin Schiraldi and manager John McNamara) and, finally, the now-Yankee manager Aaron [expletive] Boone. For 86 years, Sox fans were tormented by New Yorkers and their team from The Bronx.

“They’d break our hearts then steal our best players,” said Ian Hill, a Boston fan interviewed for the Podcast.

Eventually, borne of suffering and vitriol, Boston fans would start chanting “Yankees Suck” at games, venting at our nemesis regardless of the opponent. The chant eventually spread to other New England sporting events and anywhere there was a gathering of fans—parties, graduations, funerals.

This brings us to the night of October 17, 1999, when college student Ray LeMoine had300 bootlegged shirts reading “Yankee Sucks” made up with the date on the back.

The hardcore punk band Ten Yard Fight was playing their final show at The Karma Club on Lansdowne Street, and LeMoine, who stole the logo from New Yorkers, was going to sell them to the fans inside the club to commemorate the band’s last show.

However, it so happened that on the same night at Fenway Park, the Red Sox—propelled by the likes of Pedro Martinez and Nomar Garciaparra—were playing the New York Yankees in Game 4 of the ALCS.

It was the game of “The Phantom Tag,” where Yankee’s second basemen Chuck Knoblauch clearly missed Jose Offerman on the base path, yet Offerman was called out in an inning-ending double-play. The Sox lost the game 9-2, and soon they lost the series. The Yankees, throwing salt into the local wounds, went on to win the second of what would be three consecutive World Series, four in five years.

Meanwhile, the 300 shirts sold out that night, not to concert-goers but to Red Sox fans outside the park. LeMoine, who had the acumen to pick up on the fact that he “was right place at the right time” then recruited friends Eric Ferentz, Todd Wilson, and Jamie Manza into the enterprise, and the boys started peddling their shirts outside Fenway Park before home games, making money, hand over full-fist.

Then the group recruited a number of college friends to help sell the bootleg shirts outside the park, paying them commission, and the business took off. Sure, there would be the occasional arrest for selling without a permit, but the benefits far outweighed the risks, and an underground empire was formed.

The “Yankees Suck” chant—while still occasionally heard—lost a lot of its luster after the 2004 ALCS and the Red Sox subsequent World Series victory over the St. Louis Cardinals. At that point, lost in New England’s collective elation, beating the Yankees had become an afterthought; the scratch had been itched, a need sated.

And LeMoine knew that was “the final nail in the coffin.”

It goes without saying, the shirt sales now would never fly under the “kinder, gentler, heavily regulated” Henry/Werner/Lucchino ownership, the same guys who legally sold fans bricks and bags of dirt from the infield.

These days, the chant seems archaic and, maybe, a little nostalgic. The Yankees’ dominance belongs to another century, The Red Sox—in 18 years—have already won four World Series, more than any other franchise. 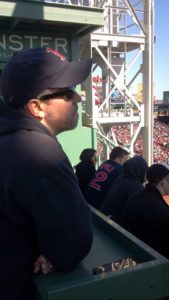 Nathan Graziano lives in Manchester, New Hampshire, with his wife and kids. His books include Teaching Metaphors (Sunnyoutside Press), After the Honeymoon(Sunnyoutside Press) Hangover Breakfasts (Bottle of Smoke Press in 2012), Sort Some Sort of Ugly (Marginalia Publishing in 2013), and My Next Bad Decision (Artistically Declined Press, 2014). Almost Christmas, a collection of short prose pieces, was published by Redneck Press in 2017.  For more information, visit his website: www.nathangraziano.com.

All in the Family

The Enthusiast| My Wild Ride as a Hip-Hop Violinist

The Enthusiast| Both Sides of the Stage: 35 Years of Boston Rock

The Enthusiast| ELLIOT EASTON: LEFT OUT IN THE COLD